How an Opportunity Becomes a Law in Wisconsin

To illustrate how a bill becomes a law we will track a current assembly bill through the legislative process. Assembly Bill 168 ensures voters are not discriminated against or prevented from voting at the polling place, even when they cannot verbally state their name and address. 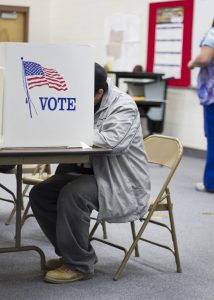 A 1940s-era law to reduce voter fraud requires voters to verbally state their name to receive a ballot (Section 6.79 (2)(a)). Some voters cannot state their name and address due to disability or medical condition. In 2018, the Disability Rights Wisconsin Voter Hotline received at least six calls related to concerns about this requirement for voters who are deaf or have a developmental disability. In one case, a poll worker told a voter that they would not receive a ballot unless the voter stated both name and address. It is likely that other voters had similar experiences but did not contact DRW.

Action Tip: Take disability-related surveys whenever you get the chance to express your experiences and opinions. Organizations use the information to communicate with legislators and inform law/policy recommendations. Call the voter hotline at (844) 347-8683 (DIS-VOTE) with any concerns you come across when voting.

This issue was brought to the Wisconsin Elections Commission (WEC) by the advisory group. The group recommended a revision which would allow someone other than the voter to identify their name and address. The WEC voted unanimously to take it forward to a state legislator: Representative Shannon Zimmerman (R – River Falls).

Step 3: Drafting Legislation: The Legislative Reference Bureau (LRB) studies current state statute and determines what needs to happen to make the suggested changes. The LRB determines if changes need to go to a vote, or if an administrative rules update would fix the issue.

The LRB recommended modifying the statute to remove barriers to voting.

Step 4: Becoming a Bill: The LRB draft is sent to the most relevant committee which decides if the draft should get bill status.

The Assembly’s Committee on Campaigns and Elections voted to make it a bill, and it became AB 168.

Step 5: Public Hearing: Public hearings are scheduled to gather information and opinions and take those into account when amending bills. The public hearing is posted so anyone from the public can attend. People can either come and testify that day and/or they can submit written testimony. 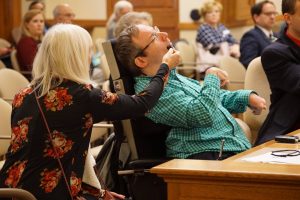 Action Tip: Public hearings are a great way to continue the conversation with legislators. Attend public hearings in your community that center around issues important to you, or submit written testimony. You will have a set time to speak. Typically, it is five minutes; the time may be shortened to two minutes if there are a lot of people to give testimony. After your testimony, the committee may ask questions, allowing a dialogue to take place.

Using information gathered at the public hearing, the committee members may amend the bill to include the public’s ideas.

During the public hearing of AB 168, it was brought to light that people with medical conditions, such as anxiety, might not be able to state their name when checking in at the polls. The bill was amended to remove the language “due to disability” so that all people unable to state their names would be represented under the bill.

Step 7: Voting by Committee: The committee then votes to approve the bill i

n an executive session to decide whether it will go on to be heard in the Assembly.

On Wednesday, May 29, AB 168 was unanimously approved by the committee and will be heard on the Assembly floor. No floor session has been scheduled yet.

Knowing and being involved in the process of how bills become laws in Wisconsin will give you the tools you need to take part in advocacy at the state level. After reading this article, you should know how the process works and what you can do to make an impact.