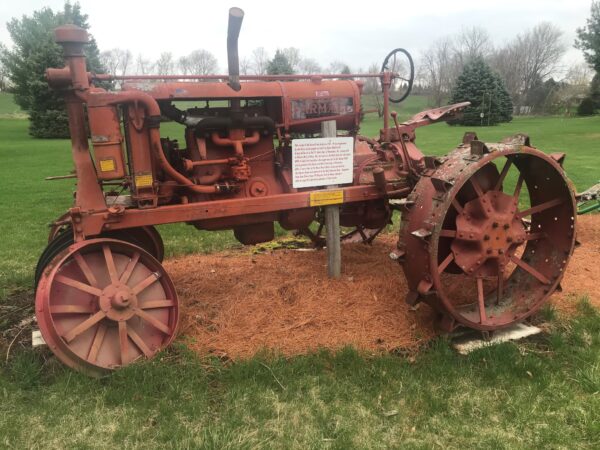 A red Farmall tractor is among the antique farm implements that dot the landscape at Harvest Hill Golf Course. The sign on the implement tells a story concocted by Maly that is among the attractions.

Two miles west of Waunakee, tucked into a pocket of homes off Highway 19 is a pay-what-you-can par-3 golf course that has benefited people who are blind and visually impaired. Sil Maly, who owns Harvest Hill Golf on Poelma Drive, established the course about 25 years ago. Last summer, the realtor and developer decided to donate weekend fees collected from golfers to go to three charitable organizations.

“I put out a card with a charity’s name on it and take every penny from the money that comes in from the golf course from a weekend and donate it. People tend to put more money in when they read that it goes to a donation and might get lifted up themselves by their contribution,” Maly says.

The Council is among the organizations that have benefitted from donations by patrons to this course. A recent weekend’s worth of greens fees netted the council $66.

Harvest Hills is on a piece of marshland left after Maly built custom homes on most of a 57 acre parcel he purchased from a farmer in 1968. Maly explains that 14 acres remained after homes were constructed on the west and east sides of the land. He planted grass, put in golf greens and brought in a number of old farm implements. A story is attached to each of the implements, all created by Maly.

One yarn attached to an antique red tractor reads, “This tractor F-20 Farmall was built in 1747. It was engineered by the Swiss watch people and built by Cyrus McCormick. It was delivered to Carl F. Statz Imp. Of Waunakee, WI. It was sold to Hubert Maly of Dane, Wi. and used on the Maly farm for 187 years. With its high tech qualities, the engine was put in the Space Craft and it powered John Glenn and Neil Armstrong to the moon. After 7 moon trips to the Moon Mars-Pluto, it was put back in the tractor frame and returned to the Maly Museum here. Engineers from John Deer, Case IH, Chrysler, Ford & Chevy stop here often to copy the high tech properties of this tractor.”

“We have a lot of people come out and, even if they don’t golf, walk the course to read the stories,” says Maly. “The stories have been out there a long time and they don’t get more true.”

In addition, he has become a client at the Council’s Sharper Vision Store as his own vision has changed. He found a lighted magnifier there that provides what he needs to read the newspaper each day. He liked the magnifier so much that he purchased one for his son and a friend.

Maly, 86, ran Sil Maly Real Estate in Waunakee, now operated by his son, Michael Maly. He says he worked hard, made some money and feels fortunate to be able to give back.