Birding by Ear Takes Off as a Hobby 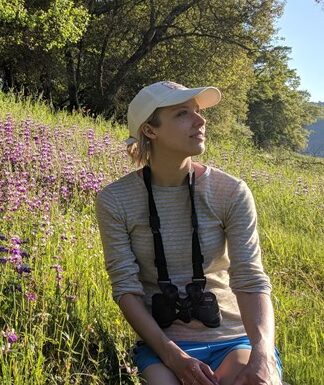 The flashes of color and melodious songs mixed with interesting plants and landscapes may be just a few of the reasons birdwatching is taking off as a hobby. Some birdwatchers also enjoy the competition of discovering a variety of bird species. But there’s a different approach to birding that is equally exciting. It’s Birding by Ear.

“Identifying birds by their songs has connected me so much more with nature around me,” Birding by Ear participant Abi Degner says. “It’s like opening up a whole new world. I don’t have to see the birds to know which ones are around me, and now I realize how many birds are in my neighborhood that I once thought were uncommon.”

The Madison woman is new to birdwatching and took the opportunity to participate in classes held by the Wisconsin Council of the Blind and Visually Impaired and its partner, the Madison Audubon Society, a local bird conservation nonprofit.

“I really feel like the classes gave me a solid foundation for identifying all the common birds I hear,” Degner says. “And as I participated, I thought about how those in the class with me and without vision may pay attention to sounds. Everyone shared how they experienced the bird songs or calls, and I realized I have not been listening to the sounds around me. This taught me so much!”

Audubon volunteer Kerry Wilcox approached both organizations in 2017. He had the idea of teaching a class to bird lovers of all sorts, including all levels of sightedness and all birding knowledge. The first Birding by Ear classes were led by Wilcox and the Council’s Access Technology Specialist Jim Denham in the spring of 2018. It included, as planned, a mix of individuals who are blind, visually impaired and sighted. One session remained inside for the fundamentals, while the second took place at Pheasant Branch Conservancy in Middleton and offered participants time to practice by opening their ears to what they’d learned. The classes have been held each spring since, with 2020 and 2021 moving entirely online.

One of the birds Wilcox focuses on in the classes includes the Black-capped Chickadee. It is a year-round resident in Wisconsin and known for singing its name, “Chick-a-dee-dee-dee”, and for heralding in warmer weather with its song, “Spring-sooooon.”

There are more than 400 bird species in Wisconsin, which can be an overwhelming number when beginning to Bird by Ear. Wilcox recommends starting with just a handful of the most common species, and each month, add one more to learn.

“This is a life-long practice, if you want it to be,” Wilcox says. “It may be tempting to learn all the birds at once, but slow and steady will help you retain what you’ve learned.”

Some of the participants in the classes say they enjoyed learning phrases to help remember the sound of the song, while others liked coming up with their own. One of the favorites is a student who compared the sound of a House Wren to a video tape being rewound. 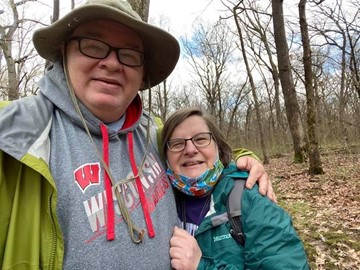 Jon Uzzel and Ellen Connor enjoy hitting the trail and birding by ear.

“Thank you for giving us the ideas and confidence to explore trails, preserves, sanctuaries, and county and state parks,” two-time participant Ellen Connor says. Connor has low vision, while her partner, Jon, does not but they took part in the classes together. “The virtual Birding by Ear classes have been a precious gem in the months of a pandemic.”

One question asked frequently is about the best resources to start Birding by Ear. There are no specialty tools or fancy binoculars required for this to be enjoyable. All you need are suitable clothes, insect repellent and your curiosity.

“It’s like a new world is open to me if I just listen. I’m now confident identifying at least five common birds, and have been gradually adding to the list,” Degner says. But she also warns, be prepared to get hooked on this hobby. “The only downside: You might find the birds start interrupting your other conversations!”

This story was produced through a collaborative effort with the Madison Audubon Society.