Ingredients for Making a Monthly Donor: A Stubborn Streak and a Big Heart 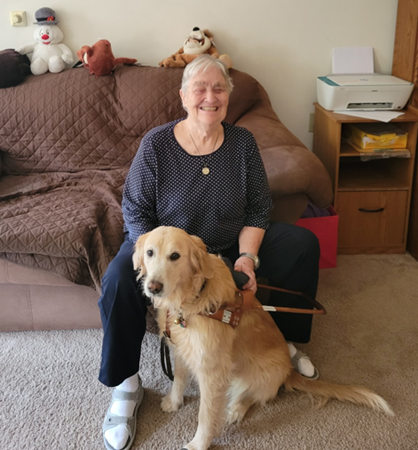 Rosemary Goodrich (Rosy to her friends) has always been stubborn and determined. Being blind since birth never stopped her from roller skating. It didn’t deter her from playing on the teeter totter, zipping down a slide or riding a tricycle. Occasionally, she’d take a tumble. “But so did all the other kids,” she says, laughing.

Rosy, 73, is also determined when it comes to supporting organizations she cares about. She is a member of our White Cane Circle of people who give to the Council monthly, and she supports a number of other groups devoted to empowering people living with vision loss. She served as a Council board member for several years.

“I believe in what the Council is doing,” she says. “Every month I donate. I think it’s a good cause. It’s not a whole lot of money but it adds up after a whole year. And I’m not going to change that.”

Roller skating and tricycling aren’t the only activities that have brought out Rosy’s stubborn streak over the years. Knitting provided another opportunity for Rosy to triumph when others doubted her. Her mother and aunt never imagined that Rosy could learn to knit. But her grandmother patiently taught her, and eventually Rosy grasped the technique. “They told me I couldn’t knit socks,” she says. “And when I learned how to knit, I learned how to knit socks! Because they told me I couldn’t do it.”

That resilience has paid off throughout her life. She’d learned braille as a child in public elementary school, but her high school didn’t provide textbooks in braille. So Rosy enrolled at the Wisconsin Center for the Blind and Visually Impaired in Janesville, where she studied the usual academic subjects plus art and music.

“We had gym, and we actually did the exercises,” which included square dancing, running track, and walking on a balance beam. That contrasted with her experience in public school, where kids who were visually impaired were sidelined while other students played sports. She also learned how to use a white cane effectively and how to type. In 1968, those typing skills eventually landed her a solid career as a medical transcriber.

From her home in downtown Milwaukee, Rosy remains active. She has a companion in Yaffa, her eighth guide dog. At Vision Forward, another nonprofit that empowers and educates people living with vision loss, she runs classes in knitting and crocheting, and is also involved in a book club. And she calls bingo games on occasion.

Are you somebody who shares Rosy’s lifelong determination and generosity? We invite you to help us celebrate the Council’s 70th anniversary by becoming a monthly donor! To learn more, contact Fund Development Director Lori Werbeckes at LWerbeckes@WCBlind.org or 608-237-8114. You can also donate directly via our website.

Facebook
Twitter
LinkedIn
Pinterest
Print
Email
PrevPrevious ArticleADRCs Can Be a Key Lifeline for Older Adults Experiencing Vision Loss
Next ArticleJoin Us for ‘Make Way for Pedestrians,’ a Webinar on Making Our Streets and Sidewalks SaferNext