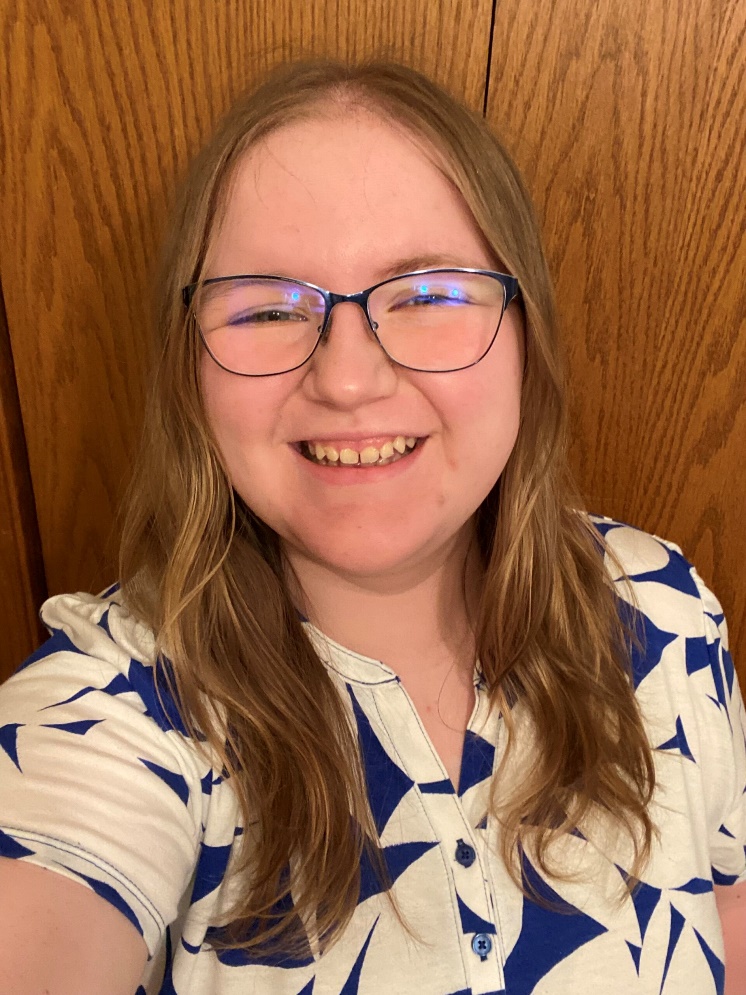 When the Slinger House Pub and Grill hired Kaylee Mueller back in 2019, they thought they were getting a dishwasher. Little did they know. Within months, Kaylee not only washed dishes, but she also began providing feedback from new employees to help management shape schedules. She helped improve work routines to increase efficiency. Then Kaylee searched for new ways to delegate duties to coworkers and update communication channels. It’s a wonder she didn’t wind up owning the place.

Now in her sophomore year at UW-Green Bay, Kaylee says going the extra mile is just how she rolls. “I was raised in a way that we were always on top of things that needed to be done,” she says. “If you saw something that needed to be done, you did it.” She believes her declared major is an extension of those values. “Being a psychology major involves wanting to help people and make sure things run smoothly.”

Born with the condition congenital achromatopsia, which affects the cones (light-sensitive cells for perceiving color) in her retinas, Kaylee uses her own experiences—especially those related to independent mobility on campus—to inform her work with UW-Green Bay’s Career Accessibility Program (CAP). “Kaylee has been a great advocate for herself, and I know she is an advocate for others as well,” says CAP Coordinator Cassandra Matte.

Kaylee says the Council scholarship has made important accommodations possible. But in her very direct way, she uses an example of an accommodation to simultaneously point out how the deck can be stacked against a student with a visual impairment.

“Living on campus is expensive,” she says. Due to her mobility needs, she has to live there even though it would be less expensive to live elsewhere. “I do have a housing accommodation because I need to stay on campus to be close to everything. But it’s the most expensive apartment on campus,” she says.

Kaylee began to work on life skills long before she knew the meaning of words like “accommodation.” That work started at home through the guidance and encouragement of her family.

“I have two older brothers and for about seven years, we lived with my grandmother as well. Between them all, there were lots of ways things were taught to me,” she says. “‘You can’t do this because you’re blind,’ wasn’t something anyone ever said. Instead, it was, ‘We’re going to find a way to do it.’”

“It” was the goal to live independently beyond her home life. “They taught me how to stand up for myself, like in the workforce,” she says. “And then that turned into being able to advocate for others.”

Kaylee is candid when describing that all this preparedness had a downside. “I didn’t get a chance to be a kid in a way,” she says. Teachers expected me to know what accommodations I needed. I didn’t have the answers then… and I don’t have some of the answers now. But I had great support. They were all there when it came down to it. I have people from elementary school that I stay in touch with who were there for me.”

Kaylee believes the most stubborn challenge she faced as a youngster with a disability is the same problem she faces now as a college sophomore. “I think the biggest barrier is the stigma of disability,” she says. “Some people are afraid to talk about it and that’s the problem. I use my white cane on campus and I can tell that people are staring at me. Because they just don’t know.”

She points out that in high school, students are taught about the women’s rights movement and the rights of people of color. “But you don’t learn anything about disabilities,” she says. “There’s so much to learn. People don’t realize that the accommodations we make in the world for people with disabilities help everyone.”

After completing her BA, Kaylee plans to get her Master’s degree in Psychology and then go into practice or social work. Meanwhile, in addition to her academics and CAP work, she’ll continue to enjoy hanging out with friends and roommates, watching Netflix movies, talking until all hours of the morning. When asked if she thinks she is missed at home now that she lives on campus, she doesn’t hesitate to answer.

“I’ve spent so much of my life trying to gain my independence and now I finally have it. Is my mom sad? Yes. But we all knew it was coming and so it’s very exciting now that it’s here.”