A Summer of Learning for Brent, a New Service for the Council 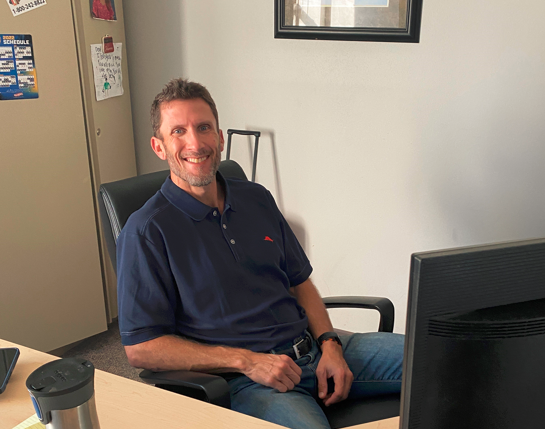 Talking shop with Certified Vision Rehabilitation Therapist Brent Perzentka, one gets the impression he’d work for free. His devotion to his work seems to come naturally, but his experience is the result of hard work. Lots of it. The Council staff veteran just completed 600 hours of training toward certification in Orientation and Mobility (O&M) instruction, a service that will now become part of the Council’s suite of tools available to clients.

Brent spent the past summer interning at the Blind Rehabilitation Center at the Edward Hines, Jr. VA Hospital in Chicago. The Center is the first and the oldest of its kind in the country, having opened its doors immediately after World War II. Brent compares his time there these past months to a medical school residency.

“There were 10 to 20 vets who lived there for program assistance for four to six weeks,” Brent says. “My general caseload was four to five vets. Vietnam was the most common. Gulf War after that. Classes were 45 minutes and ran all day.”

In addition to O&M services, the Center offered living skills classes (cooking, labeling, etc.), tech classes, visual skills (magnification, lighting, etc.) and manual skills like “changing the oil in your lawn mower,” Brent says. “These are people who may have just lost their vision or people who were relearning after losing additional vision.”

Essentially, O&M provides skills for getting around independently. That could be anything from white cane skills to get to a baseball game across town to navigating one’s own home to smoothly move from the basement laundry room to the second story bedroom. O&M Specialist training is the latest addition to Brent’s toolbox. He’s worked at the Council since 2003, first as an administrative assistant and then as manager of the Sharper Vision Store before taking on his current role on the Vision Services team. Over this period, he earned his Bachelor’s degree at UW-Whitewater and his Master’s in Vision Rehabilitation in 2018 from Western Michigan University. His O&M internship in Chicago this year coincides with completing his Masters in that specialty, also at Western Michigan.

“It has been a privilege to see Brent grow professionally from his calm and competent demeanor working with customers in the Sharper Vision Store to a highly skilled, creative and caring certified vision rehabilitation therapist,” says Council Executive Director Denise Jess. “His latest training as an Orientation and Mobility Specialist will bring a critically important service to people living with vision loss to be able to safely and confidently navigate the world around them.”

How critical are O&M skills? Brent says a person lacking them would “more than likely not be able to maintain their independence. They’d be relying on other people all the time.” Personal safety is also compromised in the absence of these skills, he adds.

Learning to instruct people in cane skills was one of the centerpieces of Brent’s training. “The main skill is being able to teach somebody how to use a long cane to navigate safely,” he says. “They’re going to learn why it’s important. Learn to trust the cane. A lot of people are not totally, legally blind. To get them to trust that cane over their vision can be a tough sell. There’s a building of confidence. You take baby steps. Building a rapport is important. They need to build trust to take your word and take that leap of faith.”

Building that trust is Brent’s favorite part of an O&M Specialist. “I sit down and get to know a person first. At the VA, these veterans are going to live there for four to six weeks. They’ve just lost their vision. They’re very scared. Their trust in the people who are teaching them there is a huge thing. Once you build that rapport with people, they’re ready to start.” Brent watched learners who were scared in the beginning get so attached to the program that they didn’t want to leave when it was over.

“One of the perks of the job is to watch someone who earlier was scared to leave their own house now move around independently on their own,” says Brent. He remembers a learner this past summer who was intimidated to go up and down the stairs in their own home. “So, they just slept on the couch, which was on the first floor,” he says. “To be able to watch them go from that fear to being able to go up and down the stairs independently, that was…” Brent’s voice breaks and trails off and he swallows down some emotion at the memory of the breakthrough. In turn, witnessing people’s progress firsthand gives Brent great confidence in the tools he can now provide.

Brent looks forward to talking about O&M with people who come to the Sharper Vision Store shopping for a cane. “To be able to ask them, ‘Well, how would you like to learn how to use this cane a little better?’ Before my training, I’d have to refer them out to somebody else. Now we can start the learning right here.”