Collaborating to Better the Lives of Workers: The Council and the Dignity at Work Coalition

Multiple factors impact whether a person can get and keep a job, from transportation to wages to schedule and childcare. Learn why employment advocacy is important, what the coalition does, and how to become involved.

Why is Employment Advocacy Important?

“Since people who are blind or visually impaired are a largely unemployed and underemployed population, we need to have a fair and living wage and benefits when we do get jobs,” says Denice Jess, CEO/Executive Director of the Council. “They are the ticket out of poverty and the ticket off of SSI and SSDI. Fair and equitable jobs create sustainability and independence.”

What is the Dignity at Work Coalition?

Formed in 2015, the Dignity at Work Coalition has members from around Wisconsin. It raises issues to legislators, sheds light on concerns and supports positive change for people who are employed. The coalition creates space where groups advocating on issues impacting employment can connect, learn from each other and support each other’s work.

“Each of our member organizations works in its own silo,” says Rabbi Bonnie Margulis, the coalition’s President and founder. “We all need our individual silos, because that is where we develop our expert knowledge. The Dignity at Work Coalition serves as a bridge between the silos so we can learn from and support each other.”

The Council is a member of this coalition because these issues align with many of the Council’s Legislative Priorities: transportation, employment and ADA/Civil Liberties.

“The issues impacting employment affect us all,” says Denise. “They are not the issue of a small margin of people.”

In a Nutshell, What Does the Dignity at Work Coalition Do?

During both the 2016 and 2018 election cycles, the coalition put together a voters’ guide for economic justice issues. This document provided information on a wide variety of issues so constituents could learn about them and ask informed questions at hearings and candidate forums. The coalition plans to prepare a voters’ guide for the 2020 election.

In February 2019, the Dignity at Work Coalition held a legislative briefing at the Wisconsin State Capitol in Madison. Various speakers, representing coalition member organizations, presented on the issues their groups serve as related to employment, and the need for legislative support to bring forth change. The briefing covered the need for: paid medical and family leave policies, affordable childcare and more sustainable and effective public transportation for workers and people with disabilities. The Council presented with Sierra Club about the importance of accessible public transportation. 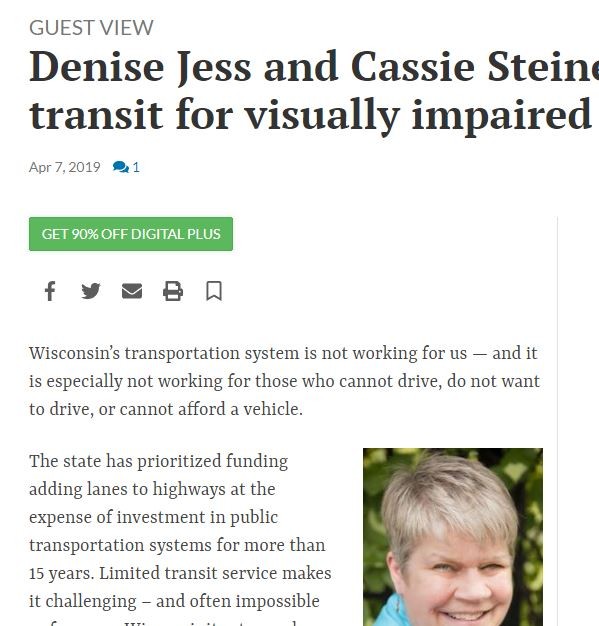 This past spring, various coalition member organizations published op-eds in newspapers throughout Wisconsin. The Council’s Denise Jess, along with Cassie Steiner of Sierra Club, published an opinion piece about the need for affordable and accessible transportation for people who are blind or visually impaired. Peggy Haack, Wisconsin Early Childhood Association outreach coordinator, wrote an opinion piece about how working families need childcare assistance. Lynette White, of coalition member organization 9to5 Wisconsin, wrote an opinion piece stating that raising the minimum wage would help women and people of color, since these people are the most likely to work a minimum wage job.

Currently, the coalition is preparing to support legislation which would, if passed, bring about paid medical and family leave in Wisconsin. This bill is to be introduced in September, so connect with the coalition for the most current information about how to get involved. The Coalition is also exploring the addition of an employment workgroup, which Jess would head, to focus on the needs of groups with high rates of unemployment.

What Can I Do Right Now?

Join the email list of the Dignity at Work Coalition and learn how to take part in their work. Get the latest updates about this group’s activities. Sign up at http://www.dignityatworkcoalition.org/. You can also sign up for Council Legislative Update emails at https://wcblind.org/who-we-are/contact/newsletter-signup/.

Do you know someone who might want to know about the Dignity at Work Coalition? Forward them this message.