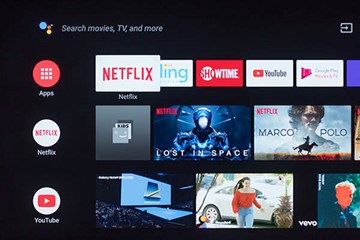 Smart TVs and streaming sticks have advanced access to television.

Until just a few years ago, people with vision loss had distinct disadvantages when trying to watch television.

Some shows conveyed intent and descriptions through dialog or other audio queues, but most did not offer an accessible option. Instead, the norm meant switching channels until hearing familiar dialog and voices to identify a program.

“I had a 40-inch television set, and my kids gave me a 55-inch TV for my birthday,” Richard Olsen says. “But I still couldn’t see it and ended up only being able to listen to my new TV.”

The 88-year-old DeForest man used to enjoy watching all kinds of television shows and became frustrated when macular degeneration created large blind spots in his range of vision.

“I just had so much trouble with macular degeneration and started not being able to see anything, including my TV,” Olsen says.

Now, technological advancements are greatly improving access to television for most people with visual impairment.

Audio descriptions: A technique where a narrator inserts descriptions during pauses in the action or dialog of a show.

Some programs offer built in audio descriptions which can be turned on through the Second Audio Program (SAP) or Multichannel Television Sound (MTS) options. You can find and turn on these features in the TV’s menu option under the accessibility tab.

Smart TVs: A TV which is connected to the internet and includes apps from a variety of sources.

Many smart TVs can accept commands using voice input, meaning you can talk to your TV. For example, users of an Apple TV can ask Siri to play classical music or show movies starring Brad Pitt.

The 21st Century Communications and Video Accessibility Act (CVAA) changed everything when it was signed in 2010. The law requires that all TVs manufactured and sold since 2017 must be accessible to individuals with disabilities, including those who are blind or visually impaired. TVs and other video-playing devices must provide video descriptions and accessible emergency information under the CVAA law. Remote controls and on-screen menu guides also must have a button, key, icon or comparable mechanism so people who are visually impaired or blind can activate video descriptions easily.

If you don’t have an accessible TV, you can still use one of the streaming sticks like the Amazon Fire Stick, Chromecast or Apple TV to increase access options. You only need to be able to select the HDMI input to which that device is connected, then, once you turn on the accessibility features for that service, the device will announce the menus and other program information.

“In some cases, you will also have to turn on audio description support,” the Council’s Certified Vision Rehabilitation Therapist Brent Perzentka says.

One of the more accessible streaming sticks, according to Consumer Reports, is the Amazon Fire Stick. You will need access to a wireless internet connection or Wi-Fi to use any sort of streaming stick.

Perzentka offers the following steps to connect a streaming stick to your TV:

“The Amazon Fire Stick, along with the other streaming sticks, has a microphone button on the remote that enables the user to speak into the remote to help navigate the television and channels,” Perzentka says. “The streaming sticks tend to work better with streaming apps on your television, but do not always work together with certain cable company boxes or satellite networks.”

The way you watch your television can often be a personal choice based on the accessibility of your TV. Olsen’s new Smart TV included a Roku app and he called the Council for additional assistance.

“I learned how to adjust the colors on my TV screen and the (Roku) app from Brent Perzentka,” Olsen says. “It greatly changed how I now see the station guide and information.”

A few more tips eased any of his remaining concerns.

“Brent also added the orange bump dots so I could feel around the area to turn on and off the power on the TV remote,” Olsen says. “I now feel secure when accessing what I want to watch on my TV.”

Vision Aware: Find a few other ways to enjoy TV if you are a person with vision loss.

Everyday Sight: Learn more about what the newest TVs offer to people who are blind or visually impaired.