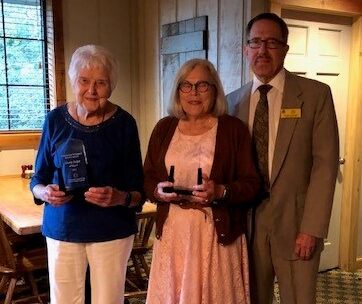 They’re retired nurses who met through their church. But what really brought Doris Dolph and Sally DeVriend together? Their passion for volunteering to make a difference in their community, which led to them receiving the Council’s Community Volunteer Service Award this year.

“As a school nurse for 25 years prior to my retirement, I did annual vision and hearing screenings on around 1,000 children,” Dolph says. “I’ve always realized how essential it is for children to be able to see and hear well in order to learn.”

The Waukesha woman kept her interest in helping children after retiring. As a long-time member of the Waukesha Lions, she received support from the club to create and carry out a new vision screening program for preschool and kindergarten kids.

“Doris was the initiator of the screening program before I joined the Lions,” DeVriend who lives in Pewaukee says. “She had asked me to help when I retired in 2011. So, I did.”

The first year, 800 children were screened. The program expanded to include students through the fifth grade a few years later. The women then screened the vision of more than 2,500 students on a regular basis. New technology made the process even faster. Though not a diagnostic tool, it provided screeners with a pass or refer result. If a student received a referral, an exam with a vision professional is suggested to the parents.

“Of the 1,911 elementary students screened in 2019, 284 or about 15 percent were referred for further testing,” Fellow Lions Club member Robert Best says.

Best surprised the women by nominating them for the Council’s 2021 Community Volunteer Service Award.

“They’ve earned the confidence and respect of educators throughout Waukesha, and they’ve recruited volunteers,” Best says. “It is very possible that, without this screening program, these students would not have had an opportunity for corrective intervention and may have suffered long term negative effects.”

Now, at the age of 89, Dolph is retiring again but this time from the volunteer program she’s been running for more than 10 years. She encourages others not to be afraid to make a difference.

“My suggestion is to not let anyone, or anything stop you if you see a need,” Dolph says. “That’s why we do what we do, and I am so grateful that I was able to get the program going and that others are continuing it.”

DeVriend will carry the work forward starting screenings at schools this Fall. She believes there’s still work to do and hopes to educate families to care about their kid’s eyesight.

“One thing I want to stress with parents is how important eyesight is for a child’s success in school and later in life,” DeVriend says. “If your child seems to have difficulty seeing, look for clues.”

She encourages parents and caregivers to observe children and notice:

“Don’t wait for a screening but instead make an appointment right away to see their doctor or a vision professional. Lions Clubs and the schools have resources to help you get the care your child may need,” says DeVriend.