Courage, Patience and Persistence are Stepping Stones on the Various Paths to Becoming a Grassroots Advocate 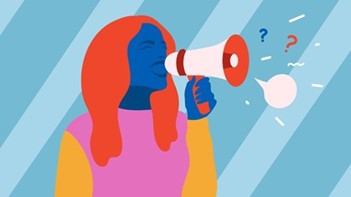 There are many paths to take on the way to becoming a grassroots advocate. Danita Jackson’s path led to the polls on election day. Danita lost her vision when she was 16 and she remembers the first time she went to the polls to cast a vote. She walked into the polling place in her Pennsylvania neighborhood and realized almost immediately trouble was afoot. She didn’t know anything about accessible voting machines back then, but neither did the poll workers. Nor did they know about any accommodation required to assist voters with disabilities in exercising their right to cast a ballot.

Help came in the form of Jafari, her ten-year-old son, who guided her as she filled out her ballot that day. “The experience was a good lesson in civic engagement for Jafari,” Danita says. It was a critical lesson for Danita, as well. One that motivated her to eventually make grassroots advocacy for individuals with disabilities her life’s work.

“She worked hard during the 2020 election making sure accessible voting machines were available and functioning,” says Wisconsin Council of the Blind & Visually Impaired Executive Director Denise Jess. “Not only that, since this was still during spikes of COVID-19, she did her best to make sure machines were clean.”

Grassroots advocacy work calls for a person to perform an aerobic combination of tasks: working city hall, hitting up elected officials with info and updates, staying in close touch with constituents, monitoring public hearings…the list goes on. Danita puts all of that into two words: “Show up.”

“You’re a servant, Danita says. “A public servant is there to make sure the community is receiving the goods and services we need and to make sure people are not ignored. Not marginalized. Being recognized as equal. We try to change the narrative.”

Jenny Neugart, who works at the Wisconsin Board for People with Developmental Disabilities, can relate. And for her, interactions with ordinary people are as helpful as those with people in high office. “You’ve got to be willing to put yourself out there and meet people,” she says. “Knowing your community. Where do people go? Building relationships. The one-on-one encounter conversation, getting key information from them to find out where they connect and find out what they’re passionate about.”

Jenny explains that as a white woman, this kind of outreach enables her to move beyond her own circles. “We’ve found so many people deep in their communities,” Jenny says. “I’m white, but we want to help in diverse communities.” Jenny notes that there are so many things to learn as an advocate. She cites the example of a person she watched turn a simple grant into bigger, larger, and more far-reaching activity that provided beneficial outcomes for the community. One step turned into, “a bigger and bigger piece of activism,” she says.
Denise says that La Crosse-based advocate Rhonda Staats, a long-time Council board member, “has advocacy in her blood.” The praise doesn’t stop there. “She has the tools of persistence and building relationships,” Denise says. “Her message matures and nuances depending on her audience.”

Rhonda, among many other things, is a member of the Wisconsin Department of Health Services’ Statutory Council on Blindness. “I can’t remember when I was not an advocate,” Rhonda says. She began to understand the need for advocacy in a very formal way when she was a student at the Wisconsin Center for the Blind and Visually Impaired. “We students were often advised to give back or pay it forward,” she says. “We had successful role models.” Rhonda began advocating in a more formalized context, including contacts with legislators, shortly after graduation.

Among Rhonda’s proudest achievements working as a disabilities advocate is the passage of the Wisconsin Education Media Access Bill. “The law provides accessible real time content to persons with disabilities attending postsecondary education,” Rhonda says. Her work on the measure shows the importance of patience and persistence. “For years, we held discussions with textbook publishers, trying to convince them that accessibility of text and education materials did not mean wholesale unlawful and unauthorized content dissemination and distribution. We finally reached agreement, and the bill passed with a bipartisan majority.”

Rhonda says that politics, especially the current political culture, makes grassroots advocacy work more difficult. “The spread of disinformation and noninformation is, in my opinion, the greatest recent factor. Uber-partisanship makes things far more difficult, as do personal attacks on those with whom you don’t agree.” Rhonda echoes Danita on the importance of getting a seat at the table. “The main thing is to keep at it, keep showing up at public events, meetings with legislators, local officials, or like-minded groups or individuals. Stay well-connected.”

Penny Happli is a grassroots advocate with vision loss based in the Rib Mountain area. If you’ve ever traveled the roads in that part of the state, chances are you’ve seen the result of her work and not even known it. Take the Rib Mountain Drive roundabout location. Based on deep safety concerns related to the traffic interchange, Penny fought against the construction of the roundabout and won.

What keeps Penny motivated to work for grassroot causes? “My passion for safety and my community,” she says. “And a better quality of life.”

In the words of the late social justice advocate Ki’tay Davidson, “Advocacy is not just a task for charismatic individuals or high-profile community organizers. Advocacy is for all of us. Advocacy is a way of life. It is a natural response to the injustices and inequality in the world.”

Penny adds that the work brings certain demands of the practitioner. “You can’t be afraid of hearing the word ‘no,’” she says. “You have to realize that things take time to get accomplished. Sometimes you have the desire that it will be done in one year. It may take a couple years depending on the scope of your project. And you have to be unafraid to ask questions.”