Updating the Law Regarding Service Animals

Julie decides to stop in to Bob’s Market on her way home from work. She has her service dog, Jasper, accompanying her. When Bob sees Julie and her dog entering the store, he is confused. He wonders why that lady has a dog with her. Is it a service animal or an emotional support animal, or a pet? How can he find out? Can he approach Julie, or will he be violating the law? What questions can he ask?

The ambiguity in Wisconsin service animal law leaves business owners and employees confused and frustrated. Some, like Bob in the example, are quietly wondering what to do. Others might ask questions of service animal handlers, and still others prohibit all animals on their premises, leaving service animal users vulnerable to discrimination. 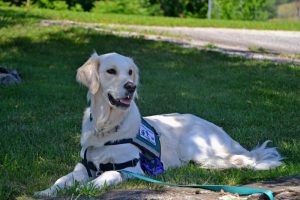 What is the Current Law?

“‘Service animal’ means a guide dog, signal dog, or other animal that is individually trained or is being trained to do work or perform tasks for the benefit of a person with a disability, including the work or task of guiding a person with impaired vision, alerting a person with impaired hearing to intruders or sound, providing minimal protection or rescue work, pulling a wheelchair, or fetching dropped items.” (Wis. Stat. §106.52(1)(fm)).

Under Wisconsin law, in settings where members of the general public are allowed, service animal handlers can be asked by staff to show an identification card issued to them by the school from which they received their service animal. Under Federal ADA, requesting an ID is prohibited. When it is not obvious what service an animal provides, business owners and employees may ask two questions: (1) is the dog a service animal required because of a disability, and (2) what work or task has the dog been trained to perform. Staff cannot ask about the person’s disability, require medical documentation, require a special identification card or training documentation for the dog, or ask that the dog demonstrate its ability to perform the work or task.

In Wisconsin, if someone denies access to a public place solely because a person uses a service animal, that individual or group can be fined up to $100 or imprisoned for up to 30 days, or both. The Federal ADA has no such penalties. Since the federal law takes precedence over state law, and since there are not sufficient penalty-enforcement mechanisms in place, complaints are rarely followed up. The Council has conducted extensive research, and in other states with stricter penalties, the penalties are rarely enforced. Developing laws with stricter penalties is not effective. Creating stricter penalties for violation could also result in greater bias toward people with disabilities.

The Council has developed a Service Animal Work Group to align Wisconsin service animal law with the ADA. Advantages of this alignment are greater clarity about what is allowed when disputes arise, less confusion about when service animal handlers can be asked to show ID, and what questions business owners can legally ask service animal handlers. In court cases where there is a dispute, national ADA overrides state law, so the alignment will reduce the number of cases that need to go through a lengthy appeals court process.

The Council will be carrying out this process throughout the 2019-2020 biennium. It is still in the early stages, so stay tuned to Council publications for updates and how you can get involved.

Who Will Be Impacted by this Change:

According to Share America, it is estimated that 500,000 people in The United States have service dogs, including guide dogs, and also dogs trained to perform tasks other than for guiding. This is 50 times the total number of those who have guide dogs -10,000. (The numbers in Wisconsin are not known). Affecting change in the Wisconsin service animal law impacts more than just those who are blind or visually impaired. Other people who use service animals include: people with mobility disabilities, diabetics, police officers, rescue workers, people who have PTSD, people in wheelchairs, people who are deaf, etc. Any veterans who fall into any of the aforementioned categories might also use a service animal. Working together, we can all strive to bring about greater access and more clarity for all service animal users throughout Wisconsin.

Greater uniformity in the law will lessen confusion for business owners, hotel and restaurant staff, cab and bus drivers, store employees, law enforcement and government personnel. It will also provide clear guidelines for people who own pets and emotional support animals, and anyone else in the general public who might encounter a service animal and its handler on the street, on public transportation, and as fellow patrons of local stores and restaurants.

The Council is excited to report many successes surrounding White Cane Safety Day. Highlights are:

We would like to thank everyone who shared White Cane Law beliefs and facts via the Council Facebook page and for voting in the White Cane Law poll. Thank you in advance for helping the Council spread the word about the law and its importance year-round.