Getting Out on the Ice: Adaptive Curling for People who are Blind or Visually Impaired 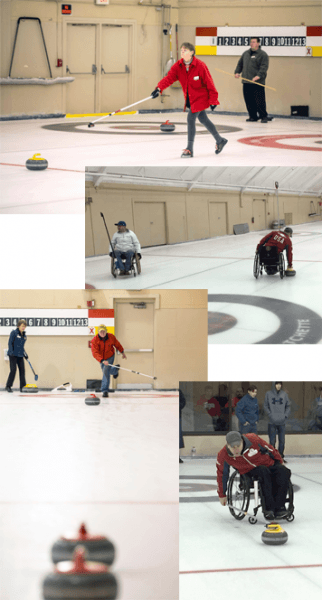 “We accommodate all levels of developmental and physical abilities,” says Allen Miller, Adaptive Curling Coordinator of the Wauwatosa Curling Club. “We adapt curling to whoever comes.”

“WASA wants to expand their winter sports offerings for people who are blind or visually impaired,” says Allen. “Our club is happy to spread knowledge and love of curling so more people can enjoy the sport. We are eager to move forward with this initiative.”

How is Adaptive Curling Played?

Curlers stand behind a line called the hog line. They slide a 40-pound stone equipped with a handle across 150 feet of ice, with the objective of getting the stone closest to the bull’s eye. Two teams of four players each take turns “throwing” the stones across the ice. After each team has thrown eight stones—an “end”—the team with the closest stones to the bull’s eye scores. The players move to the opposite side of the ice rink after each end. There are six to ten ends in a game of curling. The team which scored the most points throughout the game wins.

Adapting curling for people who are blind or visually impaired involves using a curling stick to push the stone across the ice. The stick has a cup on the end which fits over the handle of the stone, so players have optimal control over where the stone goes. A guide stands in the direction of the bull’s eye and says the player’s name, so they know which way to push the stone.

“I enjoy how relaxed the sport is,” says Marty Hutchings, a member of Wisconsin Blind Outdoor Leisure Development (BOLD), who recently tried curling for the first time as a player who has a visual impairment. “It did not take much effort to push a 40-pound stone across the ice.”

No special equipment is necessary for participants to bring to a curling event. It is recommended to wear a soft-soled shoe, such as a sneaker, and to dress in layers since the rink starts out cold and warms up due to rising body temperature as you play.

Visit the Wauwatosa Curling Club online at wauwatosacurlingclub.com/. To get on an email list for future adaptive curling events, email Allen at adaptivetosacurl@gmail.com.