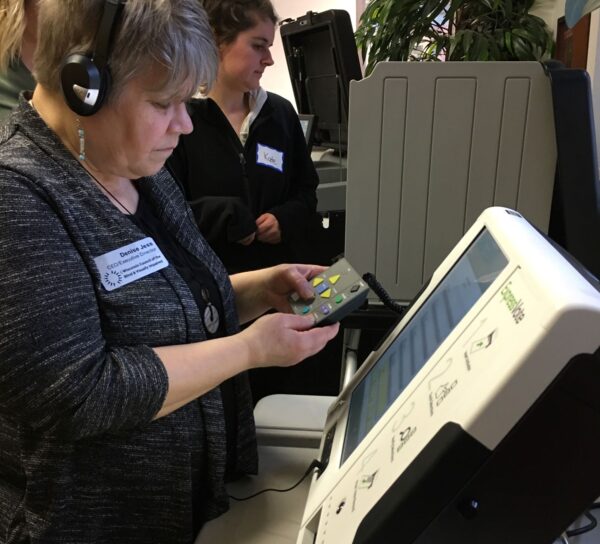 Accessible voting equipment, where the voter can hear the ballot and use a tactile device to make selections, allows people with vision loss to privately and independently cast a ballot.

If you think about your personal voting experience during the last year and focus on accessibility, how would you describe it?

A new report reveals specific issues continued to make it difficult for people who are experiencing vision loss to cast their ballots during the 2020 elections in Wisconsin.

The “Barriers Faced by Elderly Voters and Voters with Disabilities” report released by the Wisconsin Elections Commission (WEC) shows 46 polling places in just three of the state’s 72 counties had an on-sight audit and only on election day in February last year.

The WEC report also notes the reviews of those 46 polling locations uncovered 320 accessible violations, 135 of those are considered high-severity barriers likely to prevent a person from voting. An example of the issues observed range from a lack of accessible voting machines to encountering barriers when trying to enter.

COVID-19 and social distancing along with a lack of funding is cited several times in the new WEC report as reasons for the low in-person polling place audits in 2020.

Compare that to 2011 when the accessibility audit program began, and reviewers visited more than 1,600 polling locations in 66 of the state’s 72 counties. That first year, the in-person audits found more than 10,000 violations of the Americans with Disabilities Act (ADA), a wide-ranging civil rights law passed by Congress in 1990. Follow-up to those reviews was fast with overall fixes and updates.

By 2014, the state’s accessibility audit program was recognized by a presidential commission as being “robust” and a “best practice” in the country. But since that time, reports show the number of election day audits quickly fell due to a loss of earlier grant funding and staff to carry out the audits. There were only 366 in-person polling place reviews completed in 2016 and in more recent years, audits have been missed altogether and action plans to fix any violations have been slow to occur.

“This dramatic decrease in the audit program is troubling as these audits provide critical information on the accessibility of polling places around the state,” the Council’s Executive Director Denise Jess says.

Jess serves on an advisory committee with the WEC. She and other disability rights advocates who are part of the committee want to see the commission get the backing needed to do more to address the problems impacting voters with disabilities.

Several, including the Wisconsin Disability Vote Coalition (DVC), responded to the new WEC report with specific recommendations for state lawmakers. It includes the development of a plan for a comprehensive assessment of polling places statewide, and the funding to make it happen.

Much of the information guiding the DVC’s response to the report comes from real-life experiences the last year. Voters replied to a survey or told their story in person. But a majority called the Disability Rights Wisconsin (DRW) voter hotline.

Heyn is the voice on the other end of the hotline. She works to connect callers to the resources or information they need to be able to vote.

“Many are emotional by the time they call the hotline,” Heyn says. “And people who are blind or visually impaired were finding challenges with internet access or being able to use their computer at all to search for election information.”

Here are examples of the accessibility issues Heyn received from voters around the state who are blind or visually impaired:

Heyn also says there was a lot of confusion around requesting or reading absentee ballots along with uploading IDs to the My Vote website.

Advocating for an Accessible Polling Place

The good news is advocating for yourself and others with vision loss can make a difference.

Patty Slaby says her polling place has had an accessible voting machine for several years. But 2020 changed how the Arcadia woman typically votes. She decided to vote absentee due to the pandemic and by working directly with her municipal clerk, Slaby was able to cast her absentee ballot prior to the election but still using the accessible machine.

“She received permission to allow me to vote early like a week prior to election day using the accessible machine. I did this for the primary as well as for the general election,” Slaby says.

Slaby is on the Council’s Board of Directors and believes making her inquiry early was key. It also allowed her time to set up transportation to the voting site. The clerk checked her ID when she arrived, gave her the ballot, made sure audio was available, then helped Slaby place the ballot into the envelope to be counted on election day. She’s proud she took the time to advocate for herself.

“I’m very grateful and excited that my small community took time to provide me with the opportunity to participate in this democratic process which all of us should have the right to do,” Slaby says.

Don’t Wait! Here’s What You Can Do Right Now

Please contact your legislator, share your personal voting experience from last year and then ask your legislator to read the new WEC report. It has now been sent to all state lawmakers and the Governor. Highlight the importance of funding for these reviews.

You can also get information by entering your address in the search bar at the top of the state legislature website.

If you have questions or want to know more about the WEC report, you can get in touch with Council Executive Director Denise Jess by emailing her at DJess@WCBlind.org or by phone at (608) 237-8103.

If you are a voter who has experienced accessibility issues, you can report your concerns in several ways.

Facebook
Twitter
LinkedIn
Pinterest
Print
Email
PrevPrevious ArticleThe Benefits of Vision Rehabilitation in Your Own Home
Next ArticleStart Something New this Fall! Be a Monthly DonorNext